The otherworldly landscape of the Burren in County Clare, Ireland

Ireland is largely a lush patchwork of beautiful green fields, crashing ocean, and deep blue skies with cottony clouds floating by overhead. But, she is also dark and bereft of color in places. The Burren is such a place. The Burren is a 250 square kilometer area composed largely of limestone with sparse vegetation growing throughout. Compared to the beautiful green fields that surround it, the Burren stands in stark contrast. Relatively few trees grow through the limestone grid that composes much of its surface. There are a few scrub trees and shrubs that grow in the cracked limestone. But, the landscape is largely gray and lifeless.

This shot is taken from a road that winds toward Gregans East. On the steep descent there are some amazing views of the Burren in the distance. The green trees in the foreground, the blue sky, and the white clouds show how very different the Burren is from the surrounding countryside. Enjoy.

While staying in Dingle, our favorite pastime was to circle the peninsula on the Slea Head Drive. Of all the places we visited, the Dingle Peninsula was the most like the Ireland that I had envisioned. It was full of low rocky walls, small verdant pastures, picturesque houses, and views to the sea from around every corner. As a photographer I found myself stopping every 500 yards – or feet! – to compose another picture.

This shot is from near the westernmost point of the peninsula, Slea Head. I had to park our car several hundred yards up the road and walk back to this spot. As we drove around the corner I wanted to stop in this location but that would have been impractical and a bit suicidal. The roads in Ireland are very narrow and in this spot don’t even have a centerline. When two cars meet head to head it’s basically every driver for himself. So, I parked the car in a relatively wide spot in the road and dodged cars on the way back to this location.

I love the way that the low rock barrier wall leads my eye into the scene toward the lush green hills in the distance. The contrast of the blue seal with the green hills and blue-white sky makes for some great pops of color. It’s also apparent from this angle how steep the hills are and how precipitous the drop to the ocean below is. It’s a great visual representation of the beauty of this part of Ireland. Enjoy. 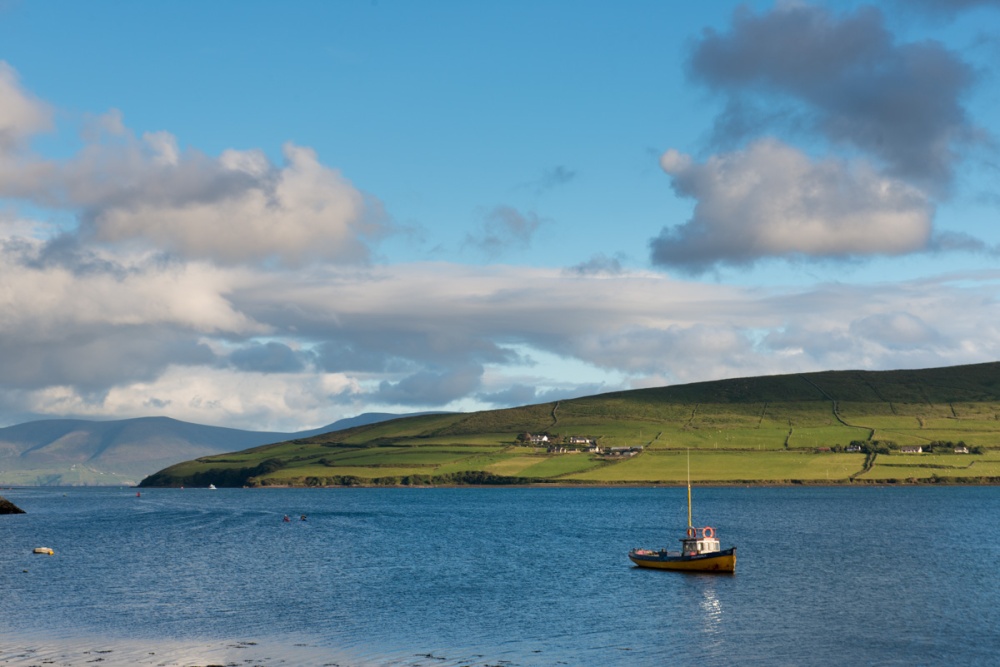 A solitary fishing boat lies at anchor in Dingle harbor

Well, it’s taking me way to long to work through my images from Ireland taken last summer. I clearly need to pick up the pace or I’ll never get around to posting a new series of images. Here’s one from the lovely Dingle Peninsula. The tide moves so much in this area that this boat would be laying on its side in the mud six hours later. At this point in the late afternoon, though, it made for wonderfully peaceful image as it lay at anchor with the beautiful Irish countryside in the distance. Enjoy.

The race track at Ballintaggart hosts the Dingle Races each August

As we drove deeper onto the Dingle peninsula, the scenery became more and more mesmerizing. There were snatches of ocean views, rolling hills, and an ongoing cascade of green in every direction we looked. Adding to the beauty of the scene was a constantly evolving partly cloudy sky that covered the landscape in a parade of shadows from the giant cumulus clouds passing by majestically overhead.

It was one of those road trips where only discipline would allow us to arrive at our destination on time. We literally could have stopped every half mile to take in yet another remarkable view. Instead we pushed on satisfying ourselves with the view through our windshield and windows. That is until we came to this scene. I literally jammed on the brakes to take in the view that you see here.

We had arrived in Ireland in the midst of race season. Although we didn’t watch much television while we were there, the local coverage was fixated on the horse races as they moved from one town or county to another over the course of the summer. We had great fun viewing the spectacle of the races at Limerick Racecourse while we were in the west of Ireland. It very much reminded me of the Kentucky Derby where the people watching is every bit as much of a spectacle as is the great race itself. Ladies in their fancy hats, gentlemen in their suits, and jockeys in their colorful silks made for an hour or so of fascinating television.

Unfortunately we were a week early to see the Dingle races in person. It would have been great fun to watch beautiful Irish horses thunder around the rolling grass track at Ballintaggart under a splendid sky with colorful banners flying and the cheer of the crowd resounding across the valley. But, I’ll have to be satisfied with my imagination coupled with the memories of the race course on a brilliant summers day. Hopefully we will be able to enjoy the Dingle Races in person someday soon. In the meantime, I hope you enjoy this image.

With apologies to my beloved national song, America the Beautiful, I’ve titled this post Ireland the Beautiful. This is perhaps my favorite image from our trip to the Emerald Isle.

As we left the Ring of Kerry, we began the short journey to the next peninsula on Ireland’s western shore, the Dingle Peninsula. Although I had enjoyed our short circuit around the Ring of Kerry and our ferry ride across the Shannon River, I was truly looking forward to spending time in and around Dingle. I had read extensively about western Ireland and the consensus among those I respected most was that the Dingle Peninsula was and is the most beautiful part of Ireland.

As we worked our way westward toward the southern coast of the Dingle Peninsula we climbed a low pass just past Annascaul on the N86. There was a small pullout that was located toward the top of the pass from which I could view the valley from which we had just traveled. I could tell before I ever stopped the car that there was an epic shot to be had from this vantage point. I only hoped that the view would not be ruined by power lines, an industrial plant, or some other modern feature.

To my delight, the view was everything that I had been looking for and more. Not only did I have the forty shades of green that I had been looking for, but I also had picturesque fields, cattle, wonderful cumulus clouds, a blue sky above them, and a wonderful soft afternoon sun side lighting the entire scene. I quickly grabbed my tripod and camera and began to capture the scene.

For me, this image captures the essence of rural Ireland. There are rolling hills, a patchwork of lush green, a small village in the distance, and even the threat of rain as the oncoming clouds touch the mountains in the distance bringing darker skies. That is Ireland – a rural country dotted with quaint villages, ancient architecture, all covered in a tapestry of lush greens and blessed with abundant sunshine and rain. I’m already looking forward to my next visit. Enjoy.